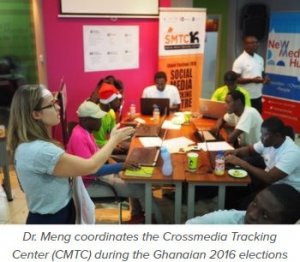 In 2016, researchers from Georgia Tech and the United Nations University Institute in Macau joined other organizations in an initiative to aggregate and analyze online reports and respond to actionable incidents during the Ghanaian national election. We deployed Aggie, a software platform for crossmedia election monitoring, and collaborated to stand up a crossmedia tracking center (CMTC1) led by PenPlusBytes in Accra, Ghana.

While Ghana has a strong modern democratic tradition, there was still concern that voting irregularities or even violence could derail the presidential elections in 2016. In the words of one of our Ghanaian colleagues, “Ghana is seen as a beacon of democracy, and all [of the] eyes on us want to find out what is happening. Can we consolidate our democracy? Can we hold on to what we are known [for]?”

In Ghana, as elsewhere, election monitoring missions are deployed to evaluate the democratic qualities of elections. They encourage good behavior but do not directly respond to irregularities or violence. On election day, monitoring missions face their biggest task when thousands of polling stations open for voting. In many cases, hundreds of trained national and international observers are sent to a representative sample of polling stations. Research has shown that the presence of these observers does indeed reduce electoral irregularities in those stations from where they report. However, irregularities do not disappear, they often just move to where observers are not present2. In recent elections, however, technology has been used to monitor a larger number of stations. In our experiences, the rise of mobile technology and social communication platforms has allowed for greater coverage and faster responses compared to relying entirely on formally trained observers.

Online communication platforms represent a broad range of technologies, from email and SMS to social media technologies like Facebook, Twitter and Instagram and instant messaging apps including WhatsApp and Wechat. Their usage has increased exponentially all across the world. Mobile internet technology is a key enabler for this wider reach, as the number of internet-enabled phones and the quality of data networks increases, while the cost of data plans often declines. This has allowed the 2.5 billion users of social media to communicate with their friends and even reach out to their government.

In the humanitarian field, these same communication platforms are being used in support of election monitoring, emergency and disaster response, and in other social and political contexts3. These initiatives have often relied on active crowdsourcing, in which organizations ask the public to contribute information directly to them through a receiver-targeting platform such as SMS or Twitter, or a purpose-built environment like Ushahidi4. They have also relied on passive crowdsourcing in which these organizations process information placed on digital platforms for communication purposes not specifically directed at the organization5. A handful of data collection platforms, like Aggie, can collect reports from both active and passive crowdsourcing, and allow CMTCs to analyze those reports for real-time triage and response.

During elections, online communication platforms are part of an information ecology where news and reports are shared across several media by different actors: politicians, the electoral commission, news media, civil society organizations, and the general public6. Information jumps across media and actors – what somebody heard on the radio becomes a tweet, a politician’s press release is uploaded as a Facebook video, a video shared on Twitter by a citizen becomes a TV news report, and so forth. Such a variety of communication sources and actors makes it difficult to track information as it spreads and, during critical events like elections, complicates the requirements for rapid real-time response.

In our 6 year experience in crossmedia election monitoring, we have witnessed the changing media landscape. From Liberia 2011, where Facebook use was hegemonic, to Ghana 2016 where we could not ignore the reach of WhatsApp. From the wider use of Twitter for reporting news almost everywhere, to the purposeful use of ELMO by the Carter Center to collect reports in Nigeria.

In our latest CMTC in Ghana, Aggie collected more than 300,000 reports from Twitter, Facebook, WhatsApp and RSS sources that were combed for incidents during the 3 days that the center was operational. These reports were analyzed resulting in 184 incidents escalated by the CMTC. A majority of the incidents (60%) were first reported online by news media or journalists. Non-affiliated individuals were the source if 26% of incidents, with most of them discovered through passive crowdsourcing of Twitter and WhatsApp reports. The rest of the incidents were reported by authorities, politicians, and the host organization.

Working with civil society partners over the last years, we have set up physical and virtual CMTCs in order to manage the deluge of reports across digital platforms during critical events such as elections7 (see side box). The goals of these centers are to 1) find actionable information among crossmedia source materials, 2) test the veracity of this information, and 3) convey relevant, actionable, and verified information to organizations that can act on it in real-time. Especially in fragile states, civil society organizations may be the best host for such centers, given the sensitivity of the data collected, the need for some independence from the political processes, and so forth. However, linkages with government are still required in many cases where incidents are escalated for a particular action.

Based on our experience, the hosting institution should establish partnerships in advance with organizations such as 1) national and international election observers, 2) the national electoral commission, 3) local media and news organizations, 4) and relevant security agencies.
The goal of a partnership with these stakeholders is to create an information flow where actionable incidents can emerge from the CMTC for final verification and potential response by the relevant partner. The best way to achieve an operational communication channel with these partners during election day is to physically place members of the center, what we call embeds, directly with the partner stakeholders. These embeds can then raise incidents in need of verification or response directly to the partner. They can also gauge the partners’ priorities to improve the overall situational awareness at the CMTC.

Journalistic media organizations are also key in the monitoring process. They are generally driven to provide timely information and have an established set of sources and freelancers around the country that are put to work during critical events8. These organizations, and their associated journalists, often already use digital platforms to disseminate news and increase their reach. We find that our crossmedia approach is able to avail itself of this traditional media expertise by carefully curating and aggregating their existing online presence.

In addition, the involvement of formal election observation organizations in crossmedia election monitoring has great potential to improve both kinds of monitoring9. Real-time sharing of information from the formal observation team to the center is desirable as it can help the center in their goals of finding and verifying incidents. In 2014, our international election monitoring partner, The Carter Center, deployed their ELMO formal election monitoring platform (a system we helped to create) to collect reports from observers in Ekiti, Nigeria. The Carter Center made those reports available to the CMTC through an automated interface with Aggie. The CMTC used the ELMO formal reports to verify incidents found through other online sources. We note that this level of information sharing requires significant trust between the CMTC and the observer organization along with a robust data security model.

It is important to recognize the characteristics and affordances of online communication platforms for election monitoring. It is also important to understand how users participate in more than one platform, creating opportunities and challenges for monitoring.

The diversity of these digital platforms and the amount of information found on them requires the involvement of local experts. They can help in identifying the specific platforms, locations, relevant authors and groups, and search terms where incident reports can be found.

CMTCs should not choose between active and passive crowdsourcing. Instead, a crossmedia approach that combines both methods across several platforms ensures that all relevant “crowds” (citizens, media organizations and journalists, politicians, government agencies) are listened to10. We have found that media organizations and journalists can be the largest source of original incidents on Twitter and the web, but citizens, who are communicating on various online media platforms, provide a valuable set of incidents that generally cover a wider range of events during elections.

The limitations and biases of social election monitoring are reduced when using such a crossmedia approach. For instance, the potentially skewed distribution of social media users towards metropolitan digital-savvy citizens is balanced across a broad set of media platforms some of which may have greater rural acceptance, while the distributed presence of media organizations and journalists may cater to a wider audience.

The 2016 presidential election in Ghana resulted in the sitting president admitting defeat and the opposition candidate peacefully taking power. The CMTC might have had a small role in that outcome. However, the impact of such initiatives does not guarantee the fairness of the elections: In the recent elections in Kenya, the monitoring initiative was not able to detect the voting and counting irregularities that led to a re-run of the elections. Thus, CMTC initiatives must be part of larger efforts to improve the democratic processes in these countries.

Crossmedia election monitoring has the potential to improve other electoral monitoring initiatives thanks to its focus on the different crowds that participate in elections – including journalists, politicians, trained observers, civil society, and citizens from the grassroots – and on the myriad platforms they use to communicate. Formal monitoring missions can benefit by knowing in real-time what the public and media are reporting. Crowdsourcing campaigns benefit by expanding into fully-fledged CMTCs so that their reports are cross-checked across diverse media and sources and their platforms support real-time analysis and action when appropriate.